One of the best ways to save money on gifts during the holidays is to give homemade presents. If you’re crafty, you’ve probably already got a long list of ideas. If not, you’re in good company here. I fancy myself to be pretty crafty, but the truth is that everything generally comes out almost-good. And almost good is really only good if you’re five and giving your mom a necklace made of cereal and/or pasta. She loves it because it’s the thought that counts. And if you remember being five, you remember that making the necklace just right was vital. Mom truly loved it. As an adult, you will not get the same response.

There is a trend that has been pretty popular overseas for a while and is just now becoming popular here in the States. It’s called “amigurumi” and it might be the best homemade Christmas present ever. I recently had the opportunity to review a book called, The Complete Idiot’s Guide to Amigurumi and if you’re sitting there still trying to pronounce the title, this book is for you!

Amigurumi (a-mee-goo-roo-mee) is Japanese for crochet/knit stuffed toy. Although the Japanese language does not differentiate between the two techniques, ami are almost exclusively crocheted and that is the technique taught in this book. The book is broken down into several sections:

Of course, there are also a few patterns at the end to get you started. I decided to try the cute hamsters pictured on the cover. They were pretty easy to make and didn’t use much yarn. I could easily get half a dozen or more from one skein. After that, I used the techniques I’d learned from the book to improve my crocheted owl that I made a few months ago. 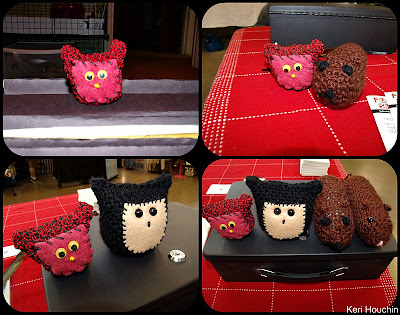 My original red owl, a second based on what I learned, and a 1st and 2nd try at the hamster.

I really enjoyed this book and plan on coming back to it regularly as a reference while I explore what else I can make. The author of the book also has a blog, Planet June, where she sells more patterns and also lists free ones occasionally.

If you’re thinking that you don’t have time to learn a new skill to make a Christmas present in less than six weeks, think again. These guys here took me three or four hours each and I always craft while doing something else, like watching tv.

The Complete Idiot’s Guide to Amigurumi is available at most bookstores, plus on Amazon.com.

Disclosure: I received a complimentary copy of this book to facilitate my review. I also have an affiliate partnership with Amazon. All opinions expressed here are my own.